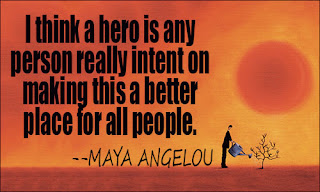 This week I am talking about Real Heroes those who inspire other people because of their misfortune, to help create a positive outcome.


On Wednesday I watched a programme on BBC 1 called Defying Gravity and it was about this young girl called Lily Rice who does Wheelchair Motocross and how she is using her sport to raise awareness to help others who are in wheelchair to do the same, to help give them a purpose in life too.

I thought it was so inspirational that for me it is people like Lily that are real heroes in our world, even though they may not see it that way. It amazes me that people like Lily have been missed under my radar because it is like "How comes I didn't know about you?" because watching that programme on BBC 1 was such an eye opener to the fact that just because you have a disability you can still do stunts just like those on bikes and scooters, in a wheelchair.

I think it is truly amazing and goes to show that anything is possible, not impossible, it is about determination and drive.

I remember I had a pen friend in Scotland called Sammy and she was such an amazing person, and we became friends through visiting my Uncle who had, had a stroke and she liked Bon Jovi and I sent her some Bon Jovi posters, because she had tried to get some at her local music store but because there were stairs and no lifts she found it hard to gain access to this area to buy one so I bought a few for her and sent them to her.

Her writing was so beautiful that if you didn't know her, you would not have had any idea that she was disabled.

She was so full of life and so happy all the time, that I remember thinking that if she can be happy with her own skin, then so can I.

I think watching this programme gives hope to so many. I remember when I did the Great North Run and there was a guy there doing the run on two sticks and he was so friendly talking to people as he went including myself and then suddenly him and his friends cheered me on as we all carried on doing the 13 mile run.

It was a fantastic boost of confidence and one that I will treasure for ever. When doing these sorts of events like music and sport, it brings so many people together that it restores you faith in mankind.

So I want us to take a moment and think about these kind of people, as they should be given knight hoods and OBE's because of how inspirational they can be.